The Latest, MDM West, and a whole lot more

It has been to long since I have blogged. During this lapse a lot has happened here at Royal Master Grinders. Most recently we exhibited at the MDM West show where we introduced a new machine for grinding dental parts. Our Generation X3 machine used a fully motorized fourth axis that can rotate from zero to 90 degrees to crate helical geometries on parts. Already having orders for 3 units, we are excited about this introduction. It will open up a whole new field for us and give us added capabilities in the medical device market for even more complex profiles.

Going back to the end of the year, Royal Master had a great 2012, strong sales, good interest which has put us in a nice position for a successful 2013. We have had a great cross section of machine sales from many industries, medical being strong, as well as the machine tool field. This was reinforced by a successful IMTS. This September show was not only successful in bringing us immediate sales on the show floor, but the immediate follow-up with strong sales after the show was good to see. The fact that there was good traffic at the show, qualified buyers roaming the asiles and lots of good projects in our booth gives us great optimism for the next two years of business.
Last week was a milestone of sorts for my father and myself. My Oldest daughter who you have been introduced to before in this blog is 10 years old, and she had a week off of school. She had a cake baking camp in the mornings, but in the afternoons my wife and I took turns watching her and our youngest daughter. Wednesday afternoon they came back to RMG and with a lot of work to be done in our shipping department, our oldest was put to work. She did an admirable job, putting a smile on the faces of her grandfather, and her father both. I was then reminded by a few people, they remember me, at that age, mowing the lawn and counting inventory. This Friday the third Generation of Memmelaar’s will officially receive a paycheck from Royal Master. 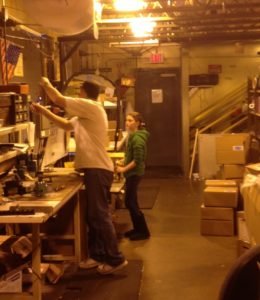 That was a quick update For those who have followed me for a while on this blog, The Embassy Suites in Anaheim still has not made their coffee any better, and the United Airlines airplanes left over from 1985 with the telephones in the arm rests REALLY need to be retired a fresh coat of paint on the outside does not make them new. Those are two topics for another day.
Thanks for reading
John