As in past years we hire an intern for the summer. We ask our intern’s to summarize their experiences at the end of the summer and this is her’s. Also as a rite of passage it is a requirement that she drives the forklift………. 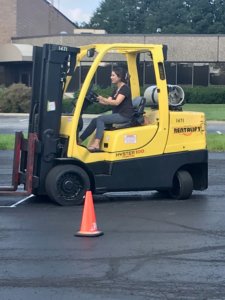 Wow, where to begin.

I would have never thought when I started here at RMG that I would learn as much as I did this summer. I can honestly say that it is one of the best environments I have ever worked in. I will leave here not only having learned so much about IMTS, but also having learned a lot about how important it is to work fluidly as a team and to have fun no matter what you’re doing. This is a family that I feel very lucky to have been a part of this summer, and I think any other intern that has the opportunity to work here would say the same thing.

Day 1: I walked in completely blind not knowing what this place even did or what would be expected of me. I had never worked in a machine shop before. I was paired with Michele to do inventory and immediately loved her energy. She was smart and funny and had this great vibe, and I knew right away I was going to like it here. Counting hundreds of little metal parts could quickly become tedious, but she didn’t make it feel that way. In fact, everybody here knows how to make the best of what they’re doing, usually by making sarcastic jokes. (Or if you’re Alan or Stacy, by singing.)

That morning, I saw a very tall man running around all over the place giving direction and joking around with everyone. It was John, the boss; the man in charge. Not knowing him yet, I was intimidated a bit at first and now I know I couldn’t have been more wrong. John is one of the most generous, kind, caring bosses I have ever had, and I have had my fair share of jobs. He is extremely easy to talk to and made the process of learning something completely new easy, even though his favorite thing to do when I have a question is to run away and pretend he doesn’t see me (lol). It’s not hard to see why he’s been successful: his personality.

Our mindset and our attitude can make or break any situation we’re in. The way we react or respond to something can make all the difference. This is one of the most important things I feel like I’ve learned from John. No matter what happened by the end of the day, he always came in the next morning focused with a refreshed attitude and a good energy – though that could also be partially credited to how much caffeine he drinks. His job can get very stressful very fast, everybody is constantly asking him questions, but he taught me that if you grin and bear it and stay positive you’ll get through anything. His energy directly affects the mood of the office. John treats everybody here like family; always teasing or making a joke to make someone smile. In return, he is respected. Not only that, but everybody is there for each other. It is such a tight-knit group of people that know so much about each other; when someone is going through a rough personal time, everybody does their best to help out or lighten the load.

Beyond that, I learned a lot about how much hard work goes into preparing a trade show like IMTS. I have organized trade shows in the past on smaller scales, but this was something entirely different. It was interesting to see how every single thing we do, even things that seemed trivial at times, contributes to the success of the show, and ultimately to the success of the company. IMTS isn’t just an excuse to travel and show off the technology they’ve been developing; it’s an opportunity to gain new customers from around the world that might not have otherwise known about Royal Master Grinders. They can converse in person and make more of an impression than they would by just emailing a prospective customer. It’s a week of networking, and then many weeks post-show of follow-up emails and new orders. The work doesn’t just end when the show does, it begins.

My internship this summer at RMG has been more than I ever could have imagined it would be. It was so cool to see these machines and what they do up close. I came into this not knowing a thing about the industry, and I feel like I’ve genuinely learned a lot and can say I am leaving this internship with more knowledge and confidence in myself. John doesn’t baby you – he tells you what he needs done and trusts you to do it. Because of this, I was able to grow and learn. John – thank you so much for this experience. I’m so thankful to have met every single person here, and I cannot wait to hear how IMTS 2018 went!