IMTS 2016 is in the books, and Restaurant Reviews

It was a fast month to say the least. Rich and I spent the better part of three weeks setting up the show, working the booth and taking it down, and shipping it home. Everything arrived on Monday safe and sound, Alex did an unbelievable job getting everything on the truck safe and secure. For his first full teardown and ship home of IMTS he did a great job and has earned a return ticket two years from now again.
We brought seven machines to the show, four from out Research and development lab and three we built specifically for the show. We were excited to have sold two on the floor, and the third was sold even before the truck got home. For all our employees here that worked hard on this project, it was more than gratifying to not only have sold the machines on the floor but to have some many people inquire about our machines. There was a lot of pride in the shop when we revealed how many leads we received and when customers started calling us after the show asking for quotes. Our employees did a great job and need to be recognized for the pride that they put into their jobs and the machines that we manufacture.
For those who remember two years ago we had two new comers to the show, they had to wear the pink bicycle helmet from the parking garage to the booth. Alex and Alan wore it proudly last time and Brandon wore it well and didn’t even flinch when it was his turn. Dan our other new addition chose the alternative, for one evening at dinner he could order nothing but Shirley Temple cocktails. He also was a great sport and happily drank his pink, flavored cocktails. 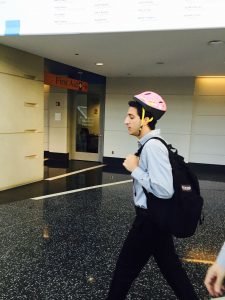 Bob Hoffman is our resident expert when it comes to all things food related, this year he outdid himself by getting Cold Stone Creamery to move below the Embassy suites on North State Street where we stay. We “ had to have it” many nights after dinner. A few other mentions go out to the following Restaurants:
• Chicago Q http://chicagoqrestaurant.com/ A great place for upscale Barbeque
• Maestros this was a dessert recommendation that I had during set-up. Go for the buttercake and live jazz music. The bar staff is the best around and more attentive then I have ever seen. It even has it own facebook Page https://www.facebook.com/mastros.buttercake?fref=ts
• For a great Glass on wine after dinner go to POPS on North State. Upscale atmosphere, great staff, and always someone to talk to . just a nice place to hang out for a drink. http://popsforchampagne.com/
• For Later Selections past normal “ business hours” go to O’ Callahans on Hubbard. I have been going there for over 20 years and it is just a good place to go. Comfortable and fun. The later it gets the crazier it gets. Just sayin’. http://www.ocallaghanspub.com/
For a little bit of humor in your day, Steve Miller of “ the Adventure and I have know each other for years. The Marketing Gunslinger Works with the parent company of IMTS, The Association of Manufacturing Technology. He stopped by Royal Master’s booth and did a “selfie” interview. I have to say it was fun and he and I always find a common ground when we do things like this. To see it in its entirety see the following link https://www.facebook.com/stevemillerpage/videos/10154087603193049/
Ignore the horrible photo of me in the beginning, THANKS FOR THAT Steve!
Again I want to thank All of our employees that did more than their fair share of work to make the show as successful as it was.
John