What’s under the box?

What’s under the box? August 1, 2014 we will lift the box off on one of the coolest projects that Royal Master has undertaken. Its started about a year ago and from there we have had a great time developing this project, it was not work, it was fun. Simply put, we are taking our core ideals of machines and redefining them to put the centerless grinders market on notice. On August 1, 2014 we will introduce to the world a New Royal Master Grinders. In the meantime if you can guess whats under the box before August 1, 2014, e-mail me and if you get it right I’ll send you an Royal Master Stain Steel coffee tumbler! johnjr@royalmaster.com
IMTS is quickly approaching and we are assembling our machines, our booth and also putting some finishing touches on projects that we have on our floor. As August 1 approaches we will have a lot of great projects to begin to reveal to people that follow our blog, and our booth6646.com website.
For those whom know about this website it is a virtual tradeshow booth. You can see whats happening in our booth before the show opens to better plan your visit, and also communicate with your colleagues during and after the show about what you have seen. We have found it is a great tool for you to use in discussing Royal Master Centerless Grinders.
The other day I stopped by our paint shop to see if a part was complete for the show. This is a common occurrence, and as I got a buzz on my phone from my daughter telling me she was home from Camp, Manual posed for this photo. It made me think that our machines ship to customers all over the world, but this is such a neat back-story of who Royal Master is, it deserves to be told.
The Santana family has been a part of Royal Master Grinders for over 30 years, with the family patriarch Fernando being the face of the family. His brothers and cousins work or have worked here in various capacities over the years. His older brother Manual whom the photo is of, began working here almost 20 years ago, and in that time has become a US citizen. Fernando also works with his family to make sure they learn English as well as get an education whether it is finishing high school or completing college coursework. Last week Rubin a younger brother gained his US citizenship, and the smile on his face spoke volumes of how proud of a moment this was for him. He asked for today off, so he could go get his passport. I was quick to say absolutely. 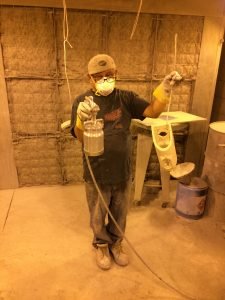 Stop back on August 1 for more details on our new project!
John