Well, IMTS 2012 is finished and we got home last night from a wild show where we saw great business, sold a couple of machines from the floor, as well as had a great amount of potential business.
Outside of the normal day to day business we enjoyed eating in Chicago, lunches from many of the Deli’s Carbonara Mexican, Jimmy John’s, and Pot Belly Deli. It beats pizza and Hamburgers every day from Convention Center. For Dinner we enjoyed Heaven on Seven for Cajun Food, Wildfire for Steak Night, Chicago Culinary Institute, Texas De Brazil, and Giordano’s for Pizza Thanks to all of those who kept our tanks full.
This year we had two IMTS rookies at the show Ryan and Jesse. Over the years we had different variations of Initiation. Our last rookie was treated to a hot sauce taste test at Heaven on Seven, where he had to eventually sign a waiver, and was warned not to pick-up the bottle without a napkin. The result was a glass of milk to quench the fire, and a round of applause from all of us with a big congratulations
This year we had a newer style of initiation. A pink bike helmet and lab coat that Jesse and ryan had to wear from the parking garage to the booth. Both wore it well, were good sports, and have passed with flying colors.
Below are a few photos 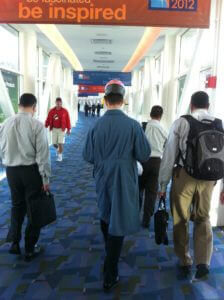 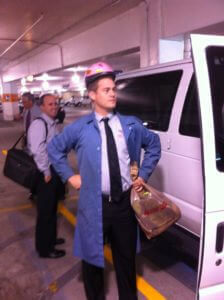 Todd and Bob as I had previously mentioned ride their bicycles in the morning, they decided that they would play a prank on me. I opened my door to my room in the morning on Monday and this is what I found.

The following photo is of us bring the bikes back to the hall to ship home. We got in trouble because we were bringing “FREIGHT” into the building and we should have used the loading docks

I would like to thank everyone who visited our booth, visited our virtual booth and have follow-ed us along on this journey. I hope that I have brought a little different view to the show, and what it takes to produce this event.
John